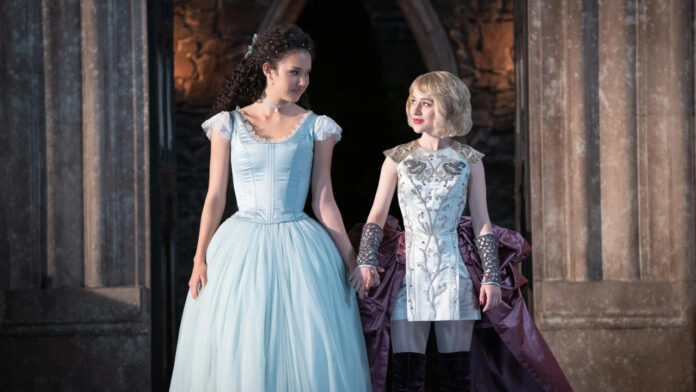 Good and Evil, it seems like a fairy tale, one of those stories that we read as children before falling asleep. The academy of good and evil from Paul Feig – director of Last Christman with Emilia Clarke – is actually that and much more. The Netflix film, available on the platform from 19 October, tells the sacred struggle between these two forces, inheriting so much from the great novels of the past. A little bit of Harry Potter that meets Once Upon a Time with a touch of Riverdalethe protagonists Sophia Anne Caruso And Sofia Wylie they are two best friends who struggle for the balance between Good and Evil. Their lives will be turned upside down forever when they go to the Academy, a school of magic where the heroes and villains of the fairy tales of the future are trained.

The film – adaptation of the books by Soman Chainani – boasts a truly stellar cast with Kerry Washington And Charlize Theron. The actresses play the principals of the schools, respectively Professor Dovey of the school of Good and the evil Lady Lasso of the school of Evil. As a narrator, another famous face on the cinema scene, Cate Blanchett.

The academy of good and evil, the plot

Best friends Sophie And Agatha they find themselves on opposite sides of an epic battle when they are drawn into an enchanted school where would-be heroes and villains are trained to protect the balance between good and evil. Both have always lived in the small medieval town of Gavaldon, a small village where everyone knows each other. However, the two teenage girls are regularly bullied and accused of being witches. Sophie she is the first who decides to make the most difficult decision: to leave the city. Living a life far from what she herself describes as “mediocrity”. Agatha instead it is totally different: he has never dreamed of a life outside the city walls. So far nothing new, if the setting were a metropolitan city we would still find ourselves in front of a story of a teenage friendship.

Two characters and two different visions. Sophie the little princess with blonde hair, Agatha the curly-haired witch. Their fate would seem apparently sealed but there is a plot reversal in The Academy of Good and Evil. The two girls are sent to the academy of good and evil, but not in the way they want. Sophiethe blonde-haired princess, ends up in the school of Evil e Agatha she finds herself surrounded by self-centered princesses and handsome princes. Both are very surprised to have landed in the wrong “house”. And as they begin to live their separate lives trying to make friends, the wicked one Rafal (Kit Young) appears to prepare them for the worst.

Good and Evil in the eternal struggle

The Academy of Good and Evil it is full of the so-called “children of art”. King Arthur’s son (played by Jamie Flatters) in the role of Good and the daughter of the evil witch of Snow White among the forces of evil. Sophie And Agathainstead, they are two “readers” and although their role as such will not be explained their exposure to magic has so far been through books. So the two protagonists must embark on their hero journey to complete the mission and win the reward. What the film does is also overturn the old rules of fairy tales. Agatha she is committed to helping her friend prove her goodness, while it doesn’t take long why Sophie reveals himself with his true self.

The young princess begins to transform into an evil hag jeopardizing the entire school. “If Evil attacks, Good defends” this is the first rule of The Academy of Good and Evil but what if the opposite happened? The Netflix movie tells us very well. The Good attacks, even with a little bit of resentment (a feeling sometimes associated with perhaps evil) and then turns from Good into Evil. Our good guys become bad and vice versa the sons and daughters of Captain Hook and the evil witch become skilled princes dressed ad hoc. This is because Good cannot exist without Evil, balance must always be restored.

The kiss of true love

Thus in the eternal struggle between Good and Evil the roles are actually reversed and for the first time we are witnessing a new side of the forces of good that are at the same time as merciless as those of evil. While Sophie turns into an old hag, it will be the task of Agatha to restore peace between the two worlds. The young woman never found her true place in the world, she never thought she could really matter until she set foot in the school. Her task her to rescue Sophie from the clutches of Rafal it will soon be done when wielding a sword like a true heroine will break the evil spell in the enemy. The academy of good and evil – which has always been a place of division – comes together under a single creed: “The forces of good and evil, together, can coexist”.

Agatha save Sophie during a desperate attempt against Rafal and when the ending seems already written and one would expect the classic kiss of love between the prince and the princess, once again we have an upheaval. Sara Agatha herself, a lifelong friend, a sister, to save Sophie giving her the true kiss of True love. Because there is nothing truer than friendship. Once she awakens Sophie decides to return to Gavaldon and so Agatha will follow her. They will return to their usual life, made up of errands for parents and housework but with two new awareness.

The Academy of Good and Evil: “And they lived happily ever after?”

And they lived happily ever after. We are used to these fabulous endings, full of pathos and empathy that make us immediately get in touch with the protagonists. This time too, the happily ever after life brings us into a new dimension, different and modern. The finale, left open to the viewer on purpose, suggests the return of new adventures that will once again lead to doubt the ancient beliefs of fairy tales and to question the forces of Good and Evil. We leave The Academy of Good and Evil with the awareness of wanting to return, at the beginning of each school year, ready to upset the classic “And they lived happily ever after…”.

The academy of good and evil: the review of the film with Charlize Theron